YOUR BROWSER IS OUT OF DATE!

This website uses the latest web technologies so it requires an up-to-date, fast browser!
Please try Firefox or Chrome!

History The Mausoleum of the Dukes

The first records about the church date back to the end of the 13th century. Previously Saint Lawrence Chapel for the leprous existed there. In 1334 Mechtylda, the duchess of Żagań, ordered expansion of the chapel, so that it became the Church of the Holy Cross. From the very beginning Saint Augustine monks from Żagań had patronage over the church. A hospital for the people of Żagań was built nearby. In the 16th century Protestants took control over the church. Only in 17th century the church returned to the monks who were present in it until the secularization of monastery estates in 1810. During the stay of Napoleon’s army in the city the church was converted into a granary. In 1844 Dorota de Talleyrand-Perigord, the duchess of Żagań, patron of culture and arts and one of the participant of Congress of Vienna, bought the building back from the City Council. Being the benefactor, Dorota decided to rebuild the church. She introduced several changes by hiring architects Carl Versen from Berlin and Leonard Dorst von Schatzberg from Regensburg. 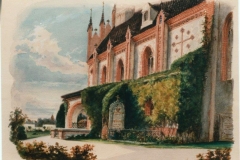 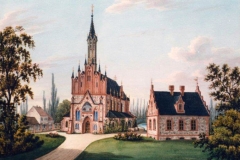 Dorota de Talleyrand-Perigord, the dutchess of Żagań, wanted three related schools of thought to be reflected in the architecture of the church: theological (holiness of Jesus Christ through crucifixion and resurrection), historical (related to the history of the church) and ancestral (mausoleum of Catholic nobles). 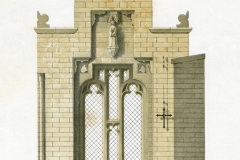 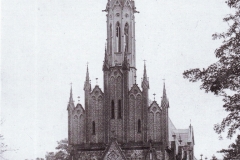 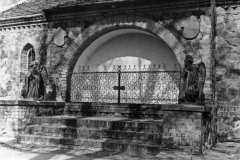 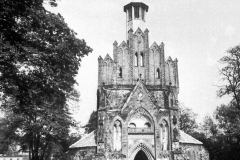 In the church there are interesting decorations such as heraldic shields of Silesian nobles. The artistic decorations of the interior are also remarkable, for example, the main altar with the painting by Karl Joseph Begas, a famous painter from Berlin who is also an author of paintings and murals in Berlin (in Deutsches Historisches Museum and in Berlin Cathedral) and in Potsdam (murals in Heilandskirche am Port von Sacrow – on the UNSECO list). The figures of saints in the church were made by B. Afinger (a sculptor from Berlin and a student of Christian Daniel Rauch) who is also an author of The Well of Christ with four Evangelists (1873) located in Bonn. 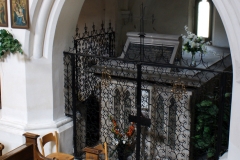 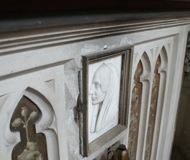 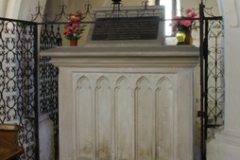 In the chancel there were the choir stalls that unfortunately did not survive until the present. A significant architecture element of the interior is the wooden groin vault which is rare in Lubuskie Province and in the northern part of the historical Lower Silesia. Żagań duchess hired Carl Samuel Scheinert, a famous glass painter from Miśnia to rebuild the church. He also painted stained-glass in the church showing saints, the Twelve Disciples, and in the chancel the former benefactors of the church (the Piast, Wallenstein, Lobkowitz and Biron princes).

In the 1850s a Hungarian composer Frantz Liszt used to play on the organs that were put in the choir loft. The church has original floors showing the elements of the Holy Cross and Żagań duchy crest. Most of the sculptures were made in 1849 by a sculptor from Żagań, Carl Lange. 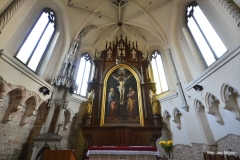 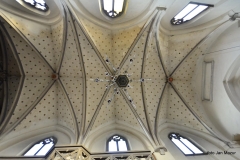 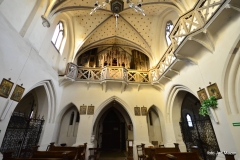 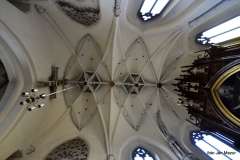 The architecture of the building resembles the French neo-Gothic style. The main entrance is heavily influenced by the church of Saint Sebaldus in Nuremberg. In 1846 on the church tower a bell made by Friedrich Gruhl from Górne Łużyce region was hung. Since the end of the II World War the bell is in Detmold, Germany. The Church of the Holy Cross is located within the former Saint Dorota hospital complex funded by princess Dorota de Talleyrand-Périgord in 1851.